With all the publicity surrounding Hurricane Irene, I began to wonder how hurricanes are named. Mostly, I wondered if there would be a hurricane with my name: Hurricane Jason. Vanity. But it turns out there won’t be. I’m not the only person to wonder. After figuring out that there are no hurricane names that start with ‘U’ I found that the rules are simple. Since 1953, hurricanes were given female names, ascending through the alphabet. In 1979, male names were added, alternating with female names (so, the tropical storm that succeeded Irene was Jose). If there are more storms than letters in the alphabet, the extra storms are named by Greek letters (Alpha, Beta, Gamma, etc.). The World Meteorological Organization maintains a cycling 6-year list of names. If a storm causes loss of life or significant damage, (e.g. Katrina), its name gets retired, and a new one is chosen to fill in.

It turns out that names in the first half of the alphabet get retired more frequently. This is unsurprising: between 1950 - 2000, only about 10 storms a year received names, so it makes sense that most of the retired names fall between A and J. Interestingly, 2005 was a banner year for hurricanes: All the names, and 6 of the Greek letter names (up to Zeta) were used, 5 names were retired that year: Dennis, Katrina, Rita, Stan, and Wilma — and a 6th, Tropical Storm Gamma may well have been retired, as it killed 39 people. But it seems that Greek letters don’t get retired. 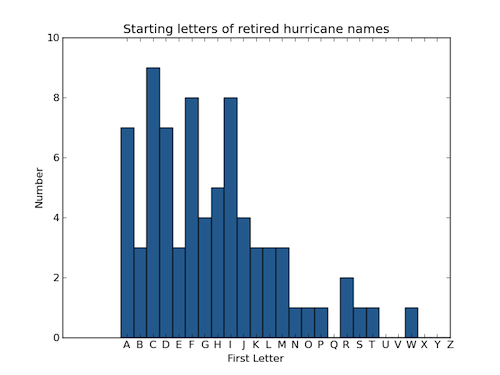 The names on the list are chosen to be “familiar to the people in each region.” In the case of the Atlantic, I wondered that a name like Joaquin (slated for use in 2015) might be chosen, while Jason was overlooked. Indeed, how many of the other chosen names are in fact not all that popular?

But why wonder? The Social Security Administration keeps records of baby names from every social security card application. You can get the top 1000 male and female names for a given year directly from their site. That list typically covers 73% of the US population. It covers 96% of the 126 names in the hurricane rotation. But for names like Fernand, Gert, Hermine, Shary, and Virginie, we’ll have to dig a bit deeper. For that, we’ll have to go beyond the top 1000 names, and download/parse a 7MB dump of all baby names that were used more than 5 times, by year (starting with 1880!). I chose to only use the 2010 data, as it is a first approximation of the current popularity of various names.

Of course, Atlantic hurricanes don’t just affect the United States, and the World Meteorological Organization is likely to use names that may be popular in Canada, Mexico, and Cuba. So the popularity data is not perfect. Nonetheless, with this data, it is easy to see which hurricane names are likely to be unfamiliar to US citizens. 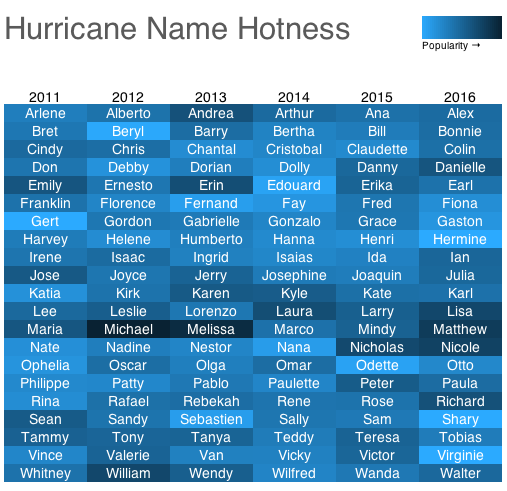 For a great roundup of other hurricane resources, check out @WhitherWater’s post on Irene.